You know sometimes I think we are collectively messed up as a people. I read things and it makes me wonder. Maybe these people have more kids than they can cater for hence the excuses of witchcraft. How can anybody accept so easily that the fruit of  their loins is evil so easily? Why have these Pastors not been prosecuted? Are folks so poverty stricken that they cannot fail to see that some of their own shortcomings tie into the lives they have? How is it a child’s fault that it’s parents are poor?

In another gut wrenching and bizarre revelation by the Child’s Right And Rehabilitation Network(CRARN)  a 40year old man, JohnFriday Akpan from Akwa Ibom State, resident in Calabar the Cross River State capital, is now explaining to the police how he heeded the advice of a herbalist, “Dr.” Okokon and eventually tagged his two children, Elisha FridayAkpan and Esther Friday Akpan as witches and wizards.

An act reminiscent of the nailing of Jesus Christ on the Cross, Friday Akpan subjected his two children aged, 12 and 6 respectively, to harrowing treatment by nailing them to a plank in shape of a cross and locking them up in a dark, thatch hut without food for weeks. He claimed that the children took his money to their “master in the witchcraft coven and therefore deserve no mercy”. He told the police.

Following weeks starvation, the two children whose emaciated and dirty physical appearance replicate the gory images of starving children in famine-ravaged Somalia and war-torn Sudan said they survived by water which was supplied to them by one of the man’s kids from another woman.

“Our sister, Peace usually bring us water inside the hut when our father and our mother had gone out”. Esther said.

Their father, the kids said, used to reside in Akpabuyo, Cross River State, Nigeria with the family where he sent them to a private school, Regent Nursery and Primary School, Ikot Nkanda but when their mother died and the man took another wife, Iquo, the story changed.

“My mother (stepmother), said the woman who used to live near our house in Akpabuyo gave us food and she put something (witchcraft spell) in the food and when we ate it we changed to bird at night and took our fathers money to ‘our master’ in the witchcraft world”. Elisha who is a JSS one student of Regent said.

According to the kids, Elisha was alleged to have taken 4,000 Naira while Esther took 2,000 Naira and that angered their father and step-mother who started beating them severely and denying them food “because they said we took their money to our master in the witchcraft coven. This is something I don’t even understand”

And another story again

Thousands of stigmatized ‘Witch Children’ have found refuge at CRARN center, in Akwa Ibom. The children were branded as “witches” by church ministers and have been cast out by their families and shunned by society.

One of them is six-year-old Israel Effiong, from Ikot Uso Ekong, Eket, who was accused of being responsible for his father’s illness. Fearing for his life, he ran away and hid in a bush for a year before he was rescued by Edoho,a volunteer with the organisation. 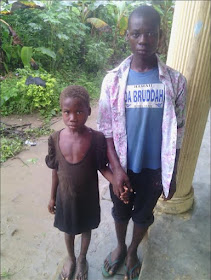 Edoho, himself is former child at CRARN Children Center. He now serves as one of the volunteers who rescue children to the centre.

“When my father became ill and taken to a hospital, my stepmom asked if I knew anything about his illness. I told her that I could not think of anything bad about my father because he’s the supporting me,” Effiong recounts.

“When his illness took a turn for the worst, my stepmom became angry with me.

In the nights, she’ll wake me up, tie my hands and legs then poured wild ants all over my body while asking me to relieve my dad from the witches coven. At times she would tie my hand and legs, began to hit my heads with sticks and electrical wires.

She stopped giving me food and locked me out of the house. I went and told the neighbors living close to us. She said she could not allow me to stay with her because my stepmother will be angry with her.

“The people living around us began to hate me and asked not to come close to their children. I went and slept in the village town hall. One night, some men came and saw me there, they brought me out and asked me to dance as witches. When I told them that I didn’t know witches dance, they used sticks and matches to beat me. A man who was passing by came and told them not kill me. They left me and warned me not come there again. I went and stayed in a bush and be coming out in the night to pick up leftover from the market garbage

“One day, I was tired and slept off in the market, a boy by name Edoho came and saw me there and told me he would come back and take me to a safe place where other children like me are living. I told him where I normally stay in the bush.

Yesterday, he came and took me the CRARN Children Center, Eket. I’m very glad to stay here because I would go to school again and sleep without fear of the unknown.”

If you can, I urge you to support CRARN and before you ask it, yes I have supported them in the past through the webforum naija ryders. If you have no matter how small please give to those less fortunate than yourself.

If you want to get angry, here is a reason to…..legislators should legislate this and leave peoples bedrooms alone.

3 Comments on Somethings are Just Tiring